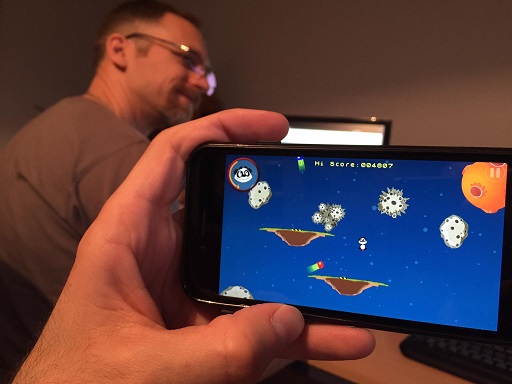 It's been in the making for a while but the mobile port for Lunar Panda Deluxe that Dean and I have been working on is now around 99.9% complete. So I thought I'd take a moment to reflect on the awesome "learning journey" that Mr Panda has taken us on these last few years.

Way back in 2012 this thing called a Raspberry Pi emerged and Dean and I thought it would be jolly good fun to write a video game for it which we could release it on their, now defunct, Pi Store. After some amount of brainstorming we came up with the idea of creating a Lunar Lander clone but with a Panda, hence Lunar Panda. At the time we found this play on words quite amusing but it's become slightly less funny with each passing year. Anyway! After a bit of research we opted to write Lunar Panda in Python using the Pycharm library because that's what everyone else seemed to be doing and writing it in assembly would have been pretty tedious. Somehow we also managed to persuade an actual proper artist, Jose Cubero, to work with us and create artwork for us.

The game design itself was pretty easy and once we'd got our heads around Python and its crazy indentation rules we were away. The game didn't really stray that far from the original Lunar Lander, the landscape was randomly generated on each level and once you'd safely landed Mr Panda a new level was generated and you started all over again whilst racking up high scores and honing your landing skills. We gave the game away for free on the Pi Store and due to the lack of competition on there we did pretty well download-wise. We even gave away the source code along with some tutorials to help others and someone even used our code to create a Dr Who Tardis that played Lunar Lander.

Next up came Indie Game the Movie. After watching that we were pretty confident we could replicate the success of Super Meat Boy by simply porting Lunar Panda to the Xbox 360. Things didn't quite reach those levels of success but we had fun developing the new version of Lunar Panda that we re-wrote from scratch using C# and the XNA library. This one had an actual story line, level design, different planets, homing mines, force fields and all sorts! We called the end product Lunar Panda Deluxe, from which we drew influence from the title Asteroids Deluxe.

Then came Game Maker and everything got a lot simpler. A lot of the complexity we experienced with our previous technology choices didn't really exist in Game Maker and once you'd got your head around how to deploy to an Apple and an Android device you were good to go. So we set about creating a brand spanking new version of Lunar Panda Deluxe for the mobile market. We've had a few distractions along the way. Due in part to the fact that it really is very easy to turn a simple idea into released game with Game Maker. So we ended up taking a few breaks from Mr Panda to work on other shorter games such as Gimpy Bomber, Gimpy Defender and New York Toy Fair: The Game (Which got a glowing review from Pat the NES punk).

Fast forward to 2017 and we're finally back on track, focusing all our energy on getting a mobile friendly version of Lunar Panda Deluxe completed. There's been quite a bit or work done around the control mechanics, save states, menu screens and other such things that compliment mobile games. The game has evolved quite a bit since the Raspberry Pi version five years ago as we've made improvements and tweaks and we're excited about finally getting this version out into the wild and seeing what people think. It's been a long time coming.

Not sure exactly how this happened but it was a pleasant surprise to find out that Pat the NES Punk has spoken in some depth about our latest game New York Toy Fair: The Game on the latest #CUPodcast. He's recommended that you all download it and give it a five star review, so off you go!

You can hear him talking about it at around 138 minutes in:

Or check out the video here:

How would you like to re-live the the entire Retro VGS / Coleco Chameleon debacle of last year? Originally written by Mike James from Retrogaming Roundup as a web based game, our latest offering sees you playing the infamous Mike Kennedy at the 2016 New York Toy Fair. Your objective is to scour the fair for components that can be used to construct a fake prototype and to go where no scam has gone before.

You can grab it now on Android and iOS for free using the links below.

Fancy playing some Rock-paper-scissors with panda bears? Well now's your chance! Panda Paws is out now on iOS and Android and it's completely free. Enjoy!