Andy and myself were recently interviewed by the wonderful Russell Prue for Anderton Tiger Radio about Lunar Panda and Gimpy Software. You can listen to it here!

It's a been a few months since we released Lunar Panda and we've since had a bit of time to sit back and reflect on the feedback we've received. One aspect that we never really considered when we put the game out was that there are actually people out there that have never actually played Lunar Lander (the 70s arcade game that Lunar Panda is based on). Here at Gimpy Software we're a bunch of hardcore retro-gamers and we kind of took it for granted that everyone has our in-depth knowledge of the games of yesteryear.

This was particularly apparent when we put Dean's Lunar Panda arcade cabinet on display at Revival. People of a certain age got it straight away and were landing Mr Panda without any issues straight off the bat. However the younger gamers that had never heard of Lunar Lander seemed slightly confused at first and required a brief explanation of the game's objective.

So! For those of you who have never played Lunar Lander, here's how to play Lunar Panda!

Objective
Land Mr Panda onto one of the landing pads. To do this both his little panda feet need to make contact with the landing pad and he needs to land gently whilst upright. You also need to keep in mind that he only has a finite amount of fuel, so thrust sparingly.

Scoring
Your end of level bonus is based on the type of landing pad you used and your remaining fuel. 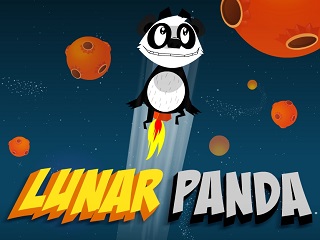 So we've been busy over the last couple of months porting the Lunar Panda from the world of Python ready for use on a wider range of devices. We're now using C# with Microsoft's XNA library (http://en.wikipedia.org/wiki/Microsoft_XNA). This allows us to compile into native code on the PC, and at the same time make a version for the XBox! Being able to use a GamePad allows finer-grained control over Mr Panda, plus allows feedback using controller vibrations. Development is ongoing, but with the increased CPU and memory available to use expect more graphics and SFX than the Python version. Asteroids, animated planets, space junk, homing mines, complex landscapes - It's all on the way! 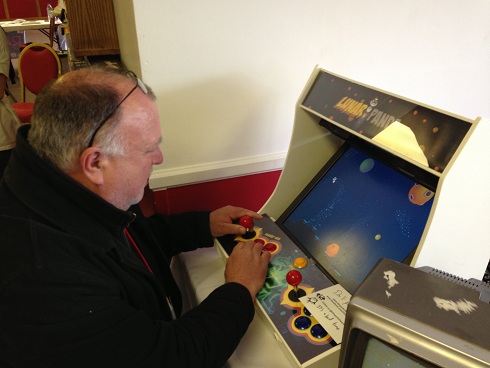 A brand new retro gaming expo took place this weekend at Wolverhampton Racecourse and since Dean's recently built a Lunar Panda arcade cabinet we thought it'd be pretty fitting to take it along. Lunar Panda faired pretty well amongst adults of a certain age who instantly recognised the Lunar Lander origins, and kids seemed to be equally intrigued by his happy little face and jetpack. The highlight of the weekend however was when Mike Montgomery, founder of Bitmap Brothers and the man behind Speedball 2, came and took control of Mr Panda. It took him a couple of attempts but he managed to land Mr Panda safely and seemed pretty impressed that the whole thing was written in Python. Turns out he's a C# man nowadays and after a brief and rather geeky conversation he even signed an autograpgh. Top man!