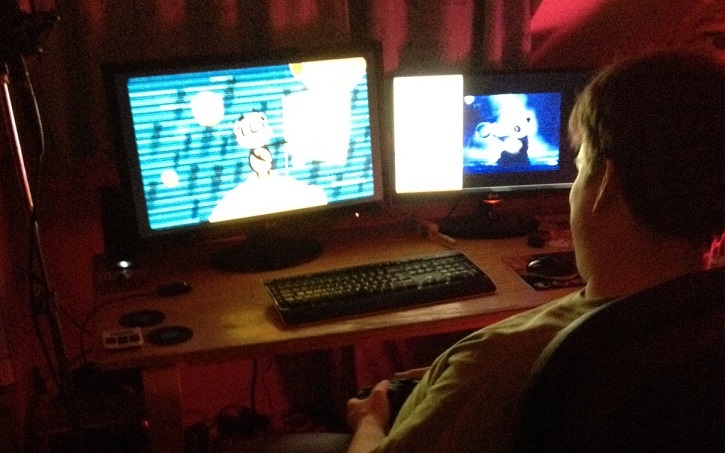 We're slowly reaching the end of the Lunar Panda development cycle and we thought it was about time to start getting some outside opinions on our new game. So in a very professional manner we stocked up on beer, ordered a shed load of pizza and invited two of our chums round to try out the game in its current state. Dean's neighbour Nik and Ian Guebert from Great Bit Blog came to Gimpy HQ where they got to play the Lunar Panda in a darkened room whilst Dean and myself sat close by and took notes.

Dean and I have obviously played the game loads over the past few months as we've been developing and tweaking it, so it was interesting to watch people play these tackle stuff like the hover cars and forcefields for the first time ever. Over all I'd say we're pretty happy with the feedback but we will be upping the difficulty on a couple of levels and easing up on a couple of others.

I met Michael Penman at the Play Expo a few weeks ago and he was nice enough to invite me onto Crazy Horse Gaming for a bit of a chat and some MineCraft action. I'd never actually played MineCraft before, I had a quick run through the tutorial a week before hand though and I'm now completely hooked. You can check out more from these guys at http://www.crazyhorsegaming.co.uk/

We chat about Gimpy Software, my band the British IBM and video games in general.

Dean's Lunar Panda cabinet had another night out last Friday and made an appearance at the Retro Video Game Night at the Centre For Computing History in Cambridge. It was a great night that mainly consisted of eating, drinking and playing the video games of yesteryear. Hopefully there'll be another one early next year!

I’ll be honest with you, the new Lunar Panda game is my first ever attempt at level design, the existing Python version didn’t really require a lot of effort in this area. We essentially 'borrowed' the main concept from Lunar Lander and each level is randomly generated. This was how a lot of games worked back in the day. Think Asteroids or Space Invaders. You have a simple idea for a game and you basically repeat that idea for each level with a possible increase in the speed of the enemy with each iteration.

However the new Panda game we’re working on now for XBox and PC does actually have levels designed by hand and even a plot that weaves its way through the game via the talking Panda screens. So I thought I’d talk a little bit about designing the new levels.

General Thought Process
Here at Gimpy Software we’ve played a lot of video games in our time, both old and new and so the first thing we did before starting work on the next Lunar Panda game was to think about similar games and how the mechanics worked in those. Two games that sprung to mind were Lemmings and Angry Birds. Both of which have simple gameplay that you’re introduced to via some very easy levels to begin with and then as the games progress you’re introduced to more obstacles and more taxing level designs. So with this in mind we knew we’d have to create some obstacles for Mr Panda to deal with and also give ourselves the ability to hand draw the landscapes rather than having them randomly generated.

Sketches
Early on we began to sketch out some level ideas on graph paper. Here’s one for the force field level that we implemented not too long ago. 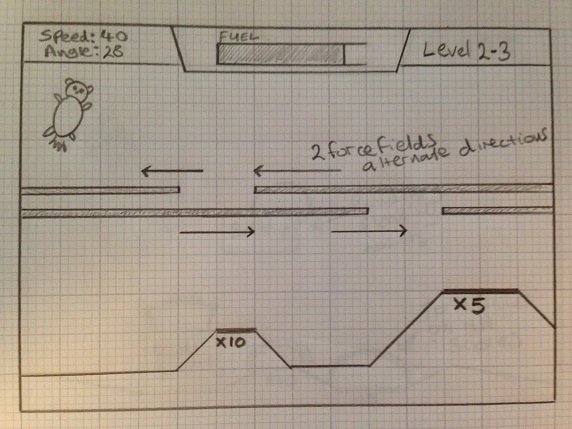